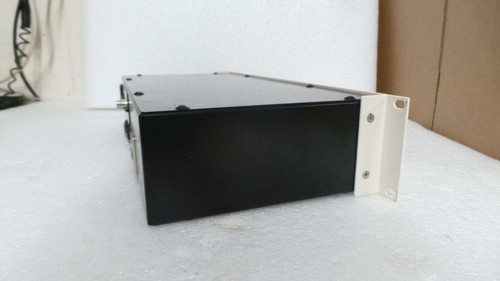 A few marks to front and casework but working well.

TL Audio's new valve mic and preamp package takes the unusual step of integrating the preamp into the mic's power supply unit. So why take two boxes into the studio, when you can just bosh and go?
For the past few years, I've been boring any microphone manufacturer who would listen with the idea of building a mic preamp into the power supply of a tube mic — the case and power transformer are already there so the extra cost should be modest. The idea behind this suggestion was that, as more people are able to work with mixerless desktop computer systems, being able to plug the output from a tube mic directly into a soundcard's line-level analogue or S/PDIF digital input should be attractive, as it eliminates the cost of an additional mic preamp and also simplifies the wiring slightly.
TLA's Ivory 2 5000 package is an interpretation of this concept that sees both the tube mic power amplifier and the mic preamp share the same 2U box, which has detachable rack ears for desktop use or rackmounting. Somehow I'd imagined the mic preamp built into the usual power-supply brick that comes with virtually all tube mics, but this is certainly a more elegant solution. There's also a rear-panel slot to add an optional 24-bit analogue-to-digital converter — this operates at 44.1kHz or 48kHz, but can also sync to external word-clock signals.
Bundled with the system is a multi-pattern tube mic of Chinese provenance based on a dual-diaphragm, one-inch centre-terminated capsule with gold-sputtered mylar diaphragms. The mic patterns can be controlled in nine steps (from omni, through cardioid, to figure-of-eight) from the preamp's front panel. Although there's no fancy flightcase with this package, the mic, which comes with a delightfully chunky shockmount, does include a soft vinyl storage pouch. The mic connects to the preamp via a 10m multi-pin XLR cable covered in woven fabric rather than PVC, rather in the style of an electric iron.
The preamp is simple, but has everything needed, including input and output gain controls, a circular moving-coil output level VU meter and a peak LED to show up transient overloads that may be too fast for the meter to register. There's also a phase invert switch and a Meter +10dB button that reduces the meter reading by 10dB to allow very high levels to be more accurately monitored. This is a good idea, because when the optional converter is fitted, digital full scale corresponds to +18dBu.
Connections
Round the back of the box is the multi-pin mic input XLR connector and a regular balanced three-pin XLR output socket, as well as the necessary IEC mains inlet. There's also an unbalanced Monitor Out that mirrors the main output and that can be used for latency-free monitoring via a mixer, or simply to provide an alternative connection format for the line output. Adjacent to the XLR output is a Mic Out switch, which feeds the mic signal directly to the XLR output without using the onboard preamp, so that you have the option to use a different preamp if you wish. However, the onboard preamp is pretty highly specified, with a -127dBu noise figure and a frequency range of 20Hz-35kHz (+0/-2dB), so there's really no reason not to use it.Below the digital expansion card slot are two more jack connectors, labelled Link In and Link Out. The card has an S/PDIF output and, as the S/PDIF format is designed for two-channel audio (normally stereo but not necessarily so), these link jacks allow two Ivory 2 5000s to be linked in order to share a single digital output card. Word-clock sync is via the usual BNC socket, and the manual stresses that the sample rate still needs to be set to match the word-clock input to ensure optimum sync'ing.
Having input and output gain controls makes the system pretty flexible, as the input gain range goes from 16dB to 60dB of gain and a further 15dB of gain is available on the output control — with 75dB of gain potential, level is never going to be a problem. The maximum output level is +26dB, so you should be able to feed even the greediest of audio interfaces to full scale.
Dual-diaphragm Condenser Microphone

The mic which forms part of the Ivory 2 5000 package comes with a sturdy shockmount, but no flightcase.
Photo: Mike Cameron
I've tried several variations on this Chinese mic theme before and they all perform exceptionally well given their modest cost. The sensitivity of this model is 14mV/Pa, which is pretty typical, and the 20Hz-20kHz frequency response shows a slight presence bump centred at around 10kHz, which gives a little airy lift to the high end. The maximum SPL is 130dB, which should be fine for anything other than kick drums. The quoted equivalent input noise is just 18dBA (EIN), which again is not bad for a tube mic and certainly nothing you'd hear in normal studio applications.
The tube used in the microphone is a 12AT7 double triode run at a full 200V and feeding a transformer balancing stage. On the body of the mic are two switches, one to bring in a 10dB pad and the other to bring in a 6dB/octave 120Hz low-cut filter. All the metalwork on the mic is nicely finished, with a satin metallic sheen, and seems very solid, with a good standard of internal workmanship.
Performance
The combination of the mic and preamp behaved very much as I expected from a decent Chinese tube mic plugged into a good-quality preamplifier. Noise was negligible and, used with a pop shield, the recording quality on vocals was fine with little or no EQ. I took the opportunity of recording a male vocal session using this mic and two solid-state Rode models I'd also had in for test. Positioning the mics as closely together as possible, I recorded the results onto three tracks so that I could compare them.
As I half expected, the tube mic exhibited a slightly stronger lower mid-range, combined with a hint less sparkly high end than the other two mics, which is a combination that can work very well for a voice that needs a little added support or that can tend towards sounding thin. Where more high-end gloss is needed, a couple of decibels of wide boost at around 12kHz provides it easily enough, which means that with very little in the way of EQ this mic should be well suited to a wide range of male and female vocal styles. It also worked fine with acoustic guitar and hand percussion, and, though large-diaphragm mics may not be the first choice when recording acoustic instruments, mics like this generally turn in a good all-round performance with no obvious weaknesses. Most of the tests were carried out using a wide cardioid pattern, as this suits most studio work pretty well, but a more open and natural sound is available when working in omni mode in acoustic environments that make that possible.
The Feeling Of The 5000
The combination of a tube mic and preamp in this format is both affordable and convenient, and by combining a Chinese-built microphone with their preamp know-how, TL Audio have managed to come up with a very attractive package. Whether you miss having a flightcase or not depends on how much mobile work you do, but in most project studios my guess is that the mic gets stored in a drawer and flightcases end up under the bed. If TLA have missed a trick, it is that they haven't included an instrument input on the front panel, but that's hardly likely to put anyone off.
I have to end by saying that this is a fiercely competitive market in the UK at the moment, which is great news for anyone wanting to buy a mic, and there are other very financially attractive tube mics of similar quality if you don't need the integral preamps. Similarly, if you don't need multiple patterns, you can save money by going for a cardioid-only model, but, where a multi-pattern mic is needed and where this integrated format appeals to you the TLA Ivory 5000 package has a lot going for it.
Pros
Convenient integrated format.
High-quality preamp with mic pattern switching on the front panel.
High-quality shockmount included.
Good sound quality.
Optional digital interface available.
Cons
No flightcase for the mic.
Summary
This integrated approach to tube mic and preamp design is good news for anyone working in a mixerless studio, and if you fit the optional digital output card, you can record via the S/PDIF input on a relatively cheap soundcard to make professional-quality recordings.
information
retail was £734.38; optional digital output board £149.23. Prices include VAT.
×