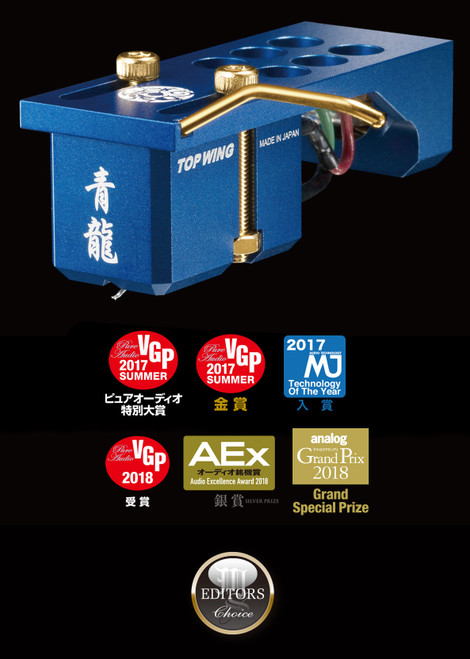 The coreless straight-flux system adopted for the “Blue Dragon” was conceived by Hiromu Meguro, former design assistant of the Grace F-8 cartridge and principal designer of F-9 cartridge, when he was with Shinagawa Musen Co. Mr. Meguro worked on the basic designs of the TX-1000 and Dragon CT players and on the design of the Center-Search mechanism during his time at Nakamichi Corp. Then, the notion that moving magnet (MM) cartridges were inexpensive and moving coil (MC) cartridges were of higher grade pushed to the back of Mr. Meguro’s mind this system’s concept, which was categorized as an MM device despite dramatic differences compared with conventional MM cartridges. This system, which fell short of commercialization even in analog audio’s heyday, is being revived thanks to today’s state-of-the-art technology.

As its name suggests, the coreless straight-flux system has no core material, with the left and right coils arranged in a V shape directly above the magnet. With that, the stylus tip picks up fluctuations in magnetic flux produced by the fine sound grooves, transmitting them directly and thus accurately. Unlike MC cartridges, in which the output line of the coil moves irregularly within the magnetic flux, the output line in this coreless straight-flux system is unaffected by such fluctuations. Moreover, a rubber damper adjusted for optimum recording reproduction enhances compliance.

The difference between the coreless straight-flux method and MM devices can be clearly seen by comparing the Blue Dragon structural diagram above and the MM structural diagram at left. MM cartridges convey fluctuations in magnetic flux to the core material, and the coil picks up the fluctuations. In this scenario, the core has a long magnetic path length and hysteresis loss. In contrast, the coreless straight-flux system is free from any such core effect.

※Stylus replacement is handled by our professional staff after the main unit is sent to us.
※When a defect other than in the stylus unit occurs, a separate service-cost estimate is necessary.

Precision design and manufacture of each of the basic parts separately maximizes the potential of the coreless straight-flux system. The Blue Dragon was designed by Yasuhiro Noguchi, president of First Mechanical Design Corp. Now active in laser technology, a field in which ultra-high levels of precision are required, Mr. Noguchi also was involved in the design of the TX-1000 and Dragon CT players when at Nakamichi.
Because of the coreless design, the output voltage of coreless straight-flux cartridges tends to be low—the Blue Dragon achieves a value of 0.2 mV thanks to the V-shaped super-precision coil, specs that are comparable to those of a typical MC cartridge. The outer shell is made of various materials, centering on Ultra Duralumin, to avoid unnecessary resonance modes. In addition, revolutionary Mitchaku Contact technology, developed by Fidelix, has been adopted for the attached headshell. Clearly, the Blue Dragon has been designed, manufactured, and assembled using Japan’s most advanced technologies.