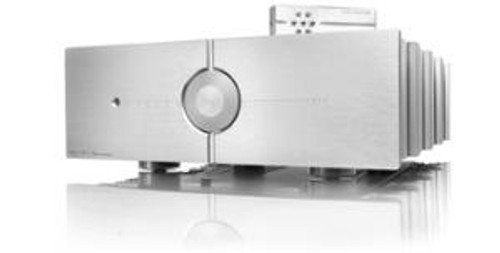 Maestro Anniversary was born in AIRTECH's laboratories following to the experience gained with the development of Puccini Anniversary. The basic scheme is very similar, but with one important difference: the amplification chain is fully balanced from the input to the power stage which becomes unbalanced to connect to the speakers. This took to a doubling of amplifier stages and attenuation. Also in the Maestro Anniversary all stages are without global feedback. The feedback is not even used on preamp stage(as in Puccini). The output power was increased to 150W on 8Ω with the consequent adjustment of all the driver and power stages that now use four pairs of transistors per channel. The basic configuration remains inverted cascode that is comparable to a single gain stage followed by the output buffer. The stability of the working point is maintained through a DC Servo that begins to work only at frequencies below a few tenths of Hertz (then totally out of the audio band). Thanks to a so refined circuitry, along with the selection of components of the highest level (military standard resistors, polypropylene audiograde capacitors custom made for AIRTECH, internal wiring with 7N OCC copper and pure copper output connectors) helped to create an amplifier that has the honor of being the heir of the glorious Maestro Integrated and therefore fully joins the Anniversary line celebrating at the same time, the first 20 years of Audio Analogue, but also 15 years by the introduction of AUDIO ANALOGUE's first product to bear the Maestro name. The new Maestro Anniversary is a unique amplifier, its remarkable power that always doubles with decreasing impedance and its extraordinary driving skills, are accompanied by a unique musicality and refinement not common for so “muscular” amps. Unfortunately it is not easy to express in words all its peculiarities and therefore we invite you to listen to it as soon as possible and can only confirm that now more than ever MUSICA MAESTRO!!!